So where did we stop? Oh, yes, the house of Joseph Deribas’s younger brother. So, opposite the building where Felix lived, there is a shopping complex called ‘Passage’.

The corner building (the corner of Deribasovskaya and Preobrazhenskaya) is considered to be a cocktail cherry on the top of the architect Leo Vlodek. Only the Bolshaya Moskovskaya Hotel, located a block down the street, can be compared with its beauty. An incredible amount of stucco molding and sculptural ensembles, and mosaic friezes are non-distinctive details for Odessa buildings of the late 19th century. 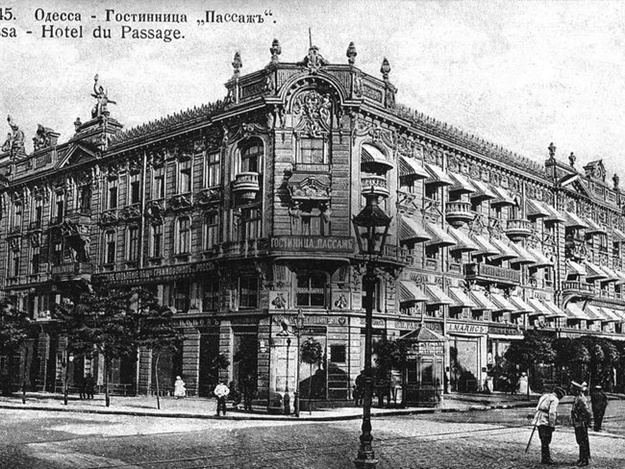 Why it’s so special? There is a very romantic legend that the opening of the ‘Passage’ was inspired by the wife of the land owner, Moses Mendelevich. After she read ‘The Ladies' Paradise’ by Émile Zola, she wanted to open the first department store so much, that she literally forced Moses to spend one million three hundred thousand to build a ‘pâte à choux’. Unfortunately, the story is doomed to a sad ending, and Mendelevich died before he had time to calculate the profit from his wife’s project.

Initially, architects maintained the Baroque style and adhered to the concept of ‘there are never too many decorations’. The house is generously decorated with sculptures, stucco, balustrades, balconies and bas-reliefs. The technical equipment is also amuse. At the beginning of the 19th century, the elevator, heating, electric lighting and a glass roof attracted as many onlookers as shops with a restaurant.

The Passage is amazing in its organic mixture of styles and trends: here you will notice the ancient Roman Fortune with a torch and Mercury on a train, or Apollo with the attributes of a Soviet worker. In some fragments are noticeable the elements of the St. Petersburg Summer Garden and the ancient Greek ligature of the meander. In short, the building can be described as follows: all the best and at once. 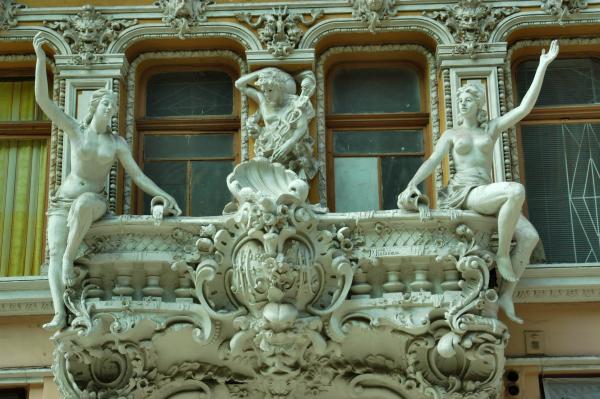 By the way, not many native inhabitants of Odessa knew about a whole secret street in the Passage until recently. Yes, the building is full of surprises: if you go from the side of Deribasovskaya street, under the stunning balcony with the initials MM (Moses Mendelevich) there will be small gates on the left side, through which you will find a small courtyard hidden from the eyes. In the old days, it was used only by hotel and restaurant employees. Now, here is a shop for artists and many workshops from the past, where you can order a baguette for a picture, repair a watch, and renew the sole on your favorite shoes. And now here is the Irish pub Fox & Pipe. 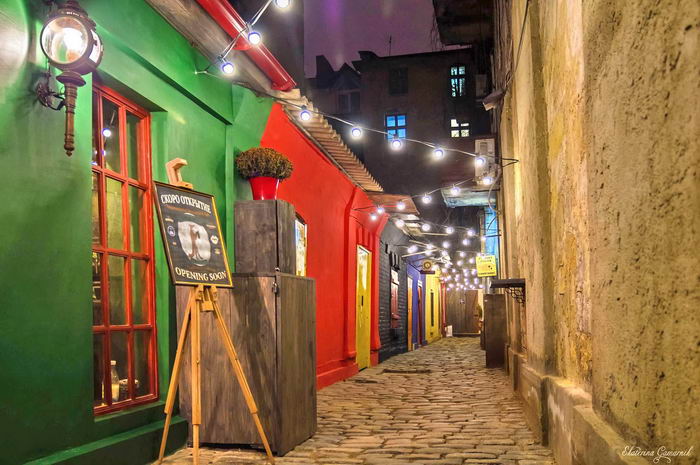 Diagonally, across the road at 23 Preobrazhenskaya Street, an unusually aerial house was raised. And it is so good-looking because it was ordered by Bernhard Liebmann, whose confectionery and bakery products were praised far beyond Odessa. 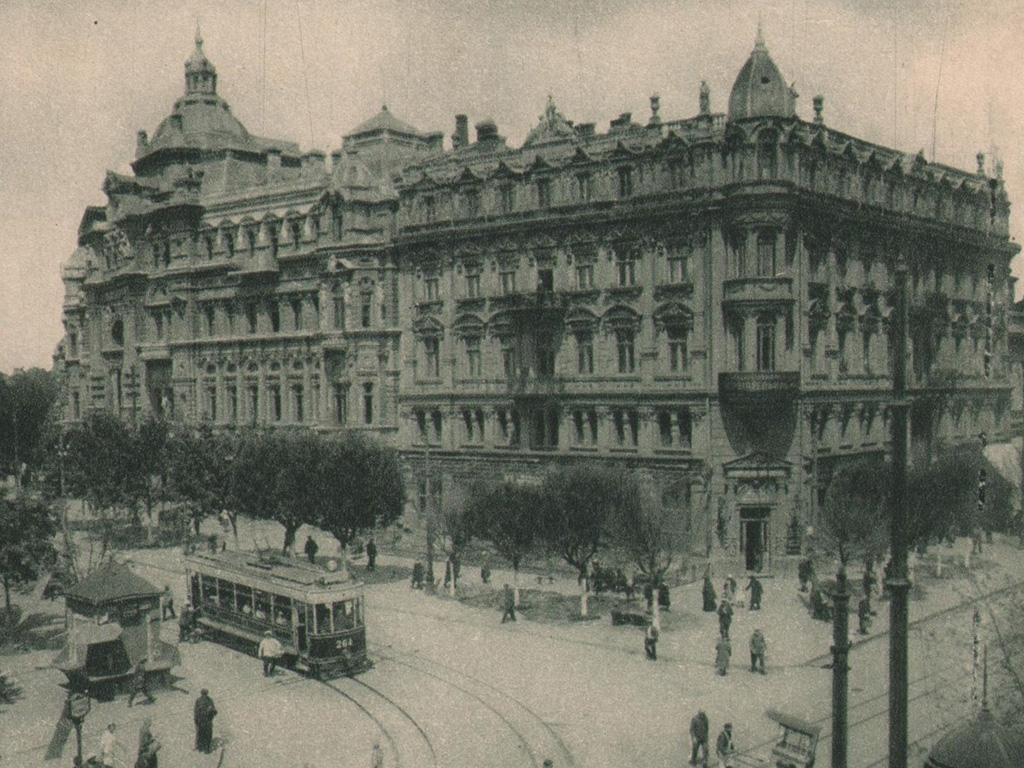 Here the inhabitants of Odessa tasted the best coffee and the most delicious bread rolls under electric light. Yes, the café was equipped with the latest technologies of that time. The bakery was a match, arranged according to the example of the best Parisian and Berlin ones: two ovens were worth 8 000 rubles (inconceivable money!). By the way, this confectionery was described by A. Kuprin in the story ‘Starlings’ and ‘Galya Ganskaya’, and also by V. Kataev in ‘The Small Farm in the Steppe’, and, of course, by Ivan Bunin.

Okay, let's move on. How about a house with Atlantes? No, not those who keep the vault of heaven and the bay window on Gogolya Street, in house No 5-7. Others, on Preobrazhenskaya Street, only the corner with Pastera Street. This is a confectionery house (real Dolce vita!) belonged to Duryan. In 1833, the first steam bakery in Odessa opened its doors. It was here, for 8 years, that Liebman honed his skill before opening his own confectionery. Just imagine: the production was so powerful that the annual revenue was 95,000 rubles! 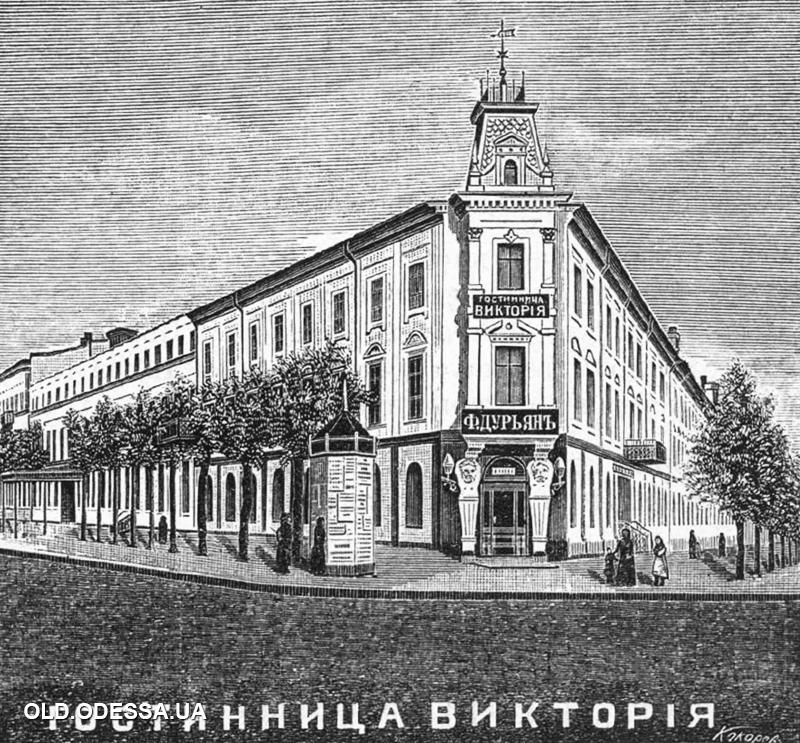 Due to its bizarre shape, the building received the name ‘Ship’. The building is the legacy of Leo Vlodek, who loved everything the most outlandish. At the entrance, visitors were greeted by two Atlantes, patiently supporting the bay window for more than a hundred years. By the way, in addition to the bakery, there was also the Victoria Hotel of Mr. Wagner. Guests were enjoying koumiss and mineral waters, and Russian, French and Polish cuisine awaited them for lunch.

Oh, and we are hungry. So, let's go to the ‘Kompot’ café? We will enjoy warm bread with forshmak... And then we will continue our trip through ancient Odessa.