We provide an interim report on the work carried out on the construction of the facility. It will be useful for those who are interested in building a hotel in Bukovel.

The brick partitions arу dismantled, which were built by previous designers. No, we are not hinting that the “predecessors” are the ones to blame for everything. The reasons for dismantling are much more commonplace. These elements had zero sound insulation and were executed with some violations. The new partitions have a soundproofing of 54 decibels (dB). This is a completely original KNAUF partition W 115. Why do we highlight this? The fact is that quite often in our country, in order to save the budget, firms take only part of the original material. The rest is replaced with cheaper locally produced substitutes. Let me explain the fundamental difference.

We put two independent profiles in the wall. Between them lies the gluing of the soundproofing material. Even if a very strong vibrational noise is produced at one side of it, it fades away inside the wall, in the 180 millimeters of acoustic wool. This is due to the fact that one of the walls begins to vibrate in response to noise, but because of the dense filling between the profiles, it does not transmit this resonance to the opposite wall. We have already completely replaced the profiles on the 3rd and 4th floors. Now we are finishing installing on the first and second. 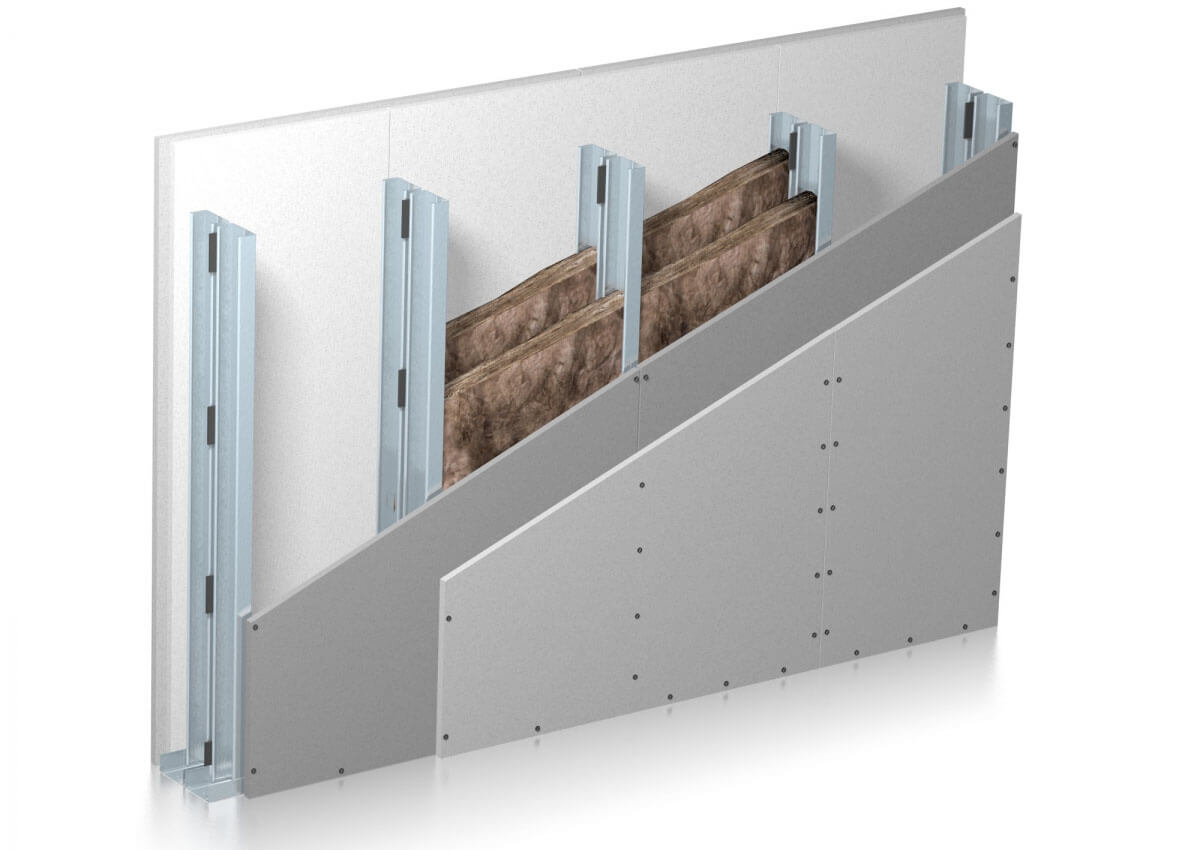 Partitions fully comply with the state building codes of Ukraine. And they, by the way, are some of the most severe. And they are higher than the requirements of the Hilton corporation, whose rooms, according to the standards, must not pass up to 52 dB.

Completed works on electricity. In many Bukovel hotels, an electrical panel is located in the room. This was done because it was more convenient for the electrician to carry out communications in the guest rooms. We installed the panels in a separate niche in the halls, so that in case of a malfunction, we do not disturb guests and fix the breakdown even before complaints are received. Also, the staff always has access to the dashboard, if necessary.

All water lines are installed: floor heating, heated towel rails, radiators, etc. All bathrooms have floor heating. They will work all year round: more intensively in winter and weaker in summer, respectively. During the high season, the flow of guests increases, and the bathrooms do not always have time to dry perfectly after thorough cleaning of the maids. A warm floor is guaranteed to ensure drying.

Heated towel rails will also operate year-round at varying degrees of intensity so that guests can feel comfortable with towels that are always dry and warm.

The hotel provides continuous circulation of warm water. This means that the water will always be at a temperature comfortable for the body. The guest will not need to wait about 20-25 seconds while it goes up the pipes from the boiler. It will be delivered to the most remote numbers in the worst scenario 4-5 seconds. It should be 3-4 seconds. Therefore, we install special Israeli system shower mixers that “mix” hot and cold water themselves and serve water at a comfortable temperature to the guest. 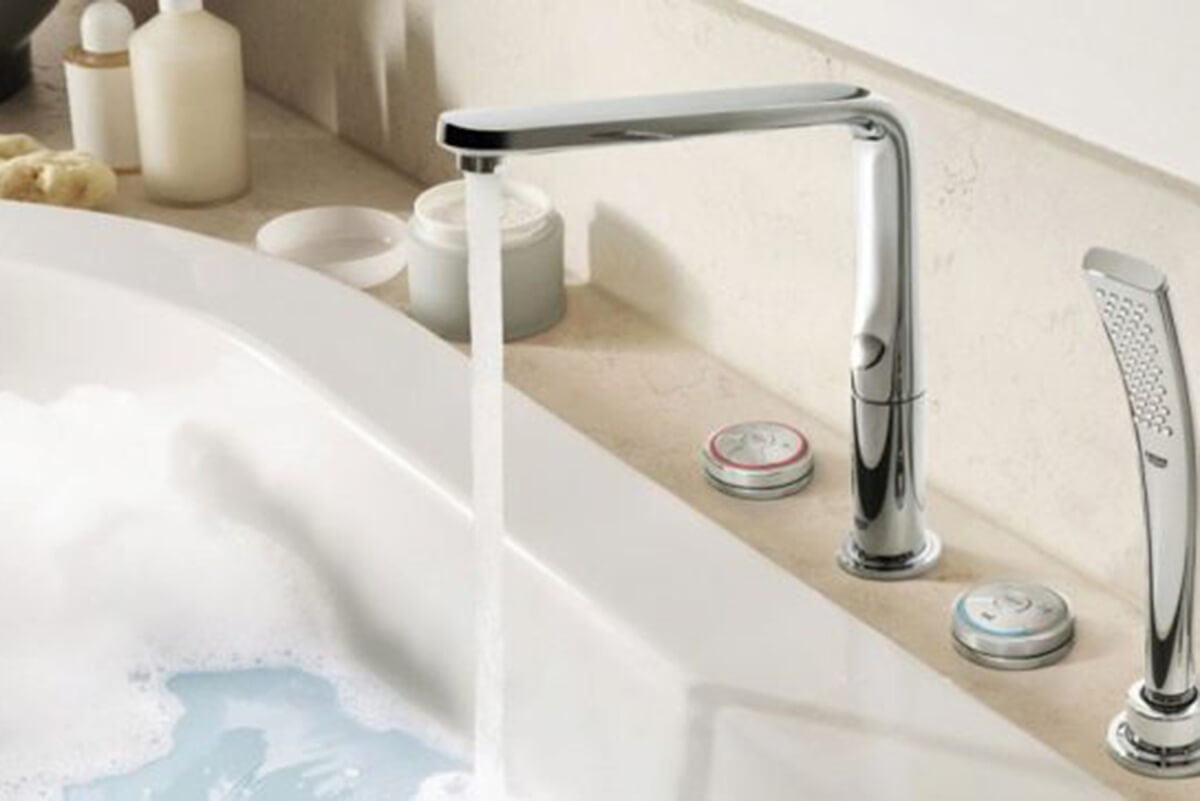 We make partial replacement of windows. They were incorrectly fitted to their dimensions.

We forced the designers to redesign the second building. We provided them with an updated concept, from which the previously designed 40 * 40 columns were removed and replaced with pylons - more elongated columns that could be placed at wall level. Due to this, it would not "eat up" a lot of usable area.

We ordered special doors, that provide 42 dB of sound insulation. They have two automatic thresholds and a special acoustic panel. The doors are also fire resistant - 30 minutes. That is, if there is a fire in the corridor, then the guest has 30 minutes in the room until the fire reaches the room. This is a high figure.

The last such large order from this company was for the Aloft hotel.

We ordered furniture from a brand that works specifically for HoReCa. In addition to high quality products, the company is also notable for the fact that they have a wide range of fabrics and woods. 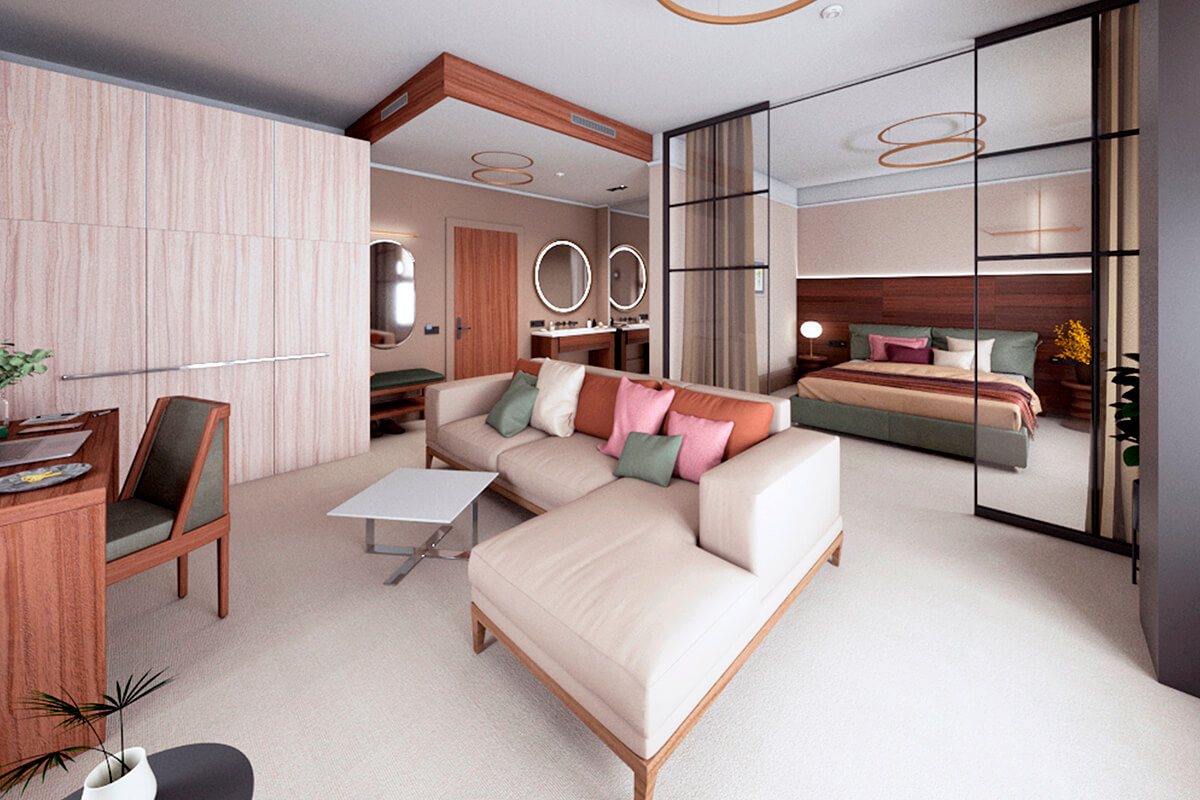 There are also positions that will be made to order. Beds, tables, some interior items. They will be produced by three fairly large companies. One of them made furniture for Radisson Blu. And, by the way, they gave it at a very pleasant price for us. Note that almost all positions are given with maximum discounts. We can count on contractual discounts given that this is a very interesting property. This is a plus for the management company and the turnover with which it works.

One of the most eloquent examples of such mutually beneficial cooperation can also be traced to the example of the Ribas Bukovel Hotel. The rooms will have Italian toilets, although we originally planned to install Polish ones. But the Italian factory was so interested in us that it made a commercial offer for plumbing, which "interrupted" the conditions of Polish suppliers.

We consider contractors for facade ventilation. We like some samples of Belgian manufacturers, but we are still at the selection stage.

We will keep you posted about further work at the facility. Subscribe to our blog to be the first to receive information on the topic - "hotel design" and other profile topics. 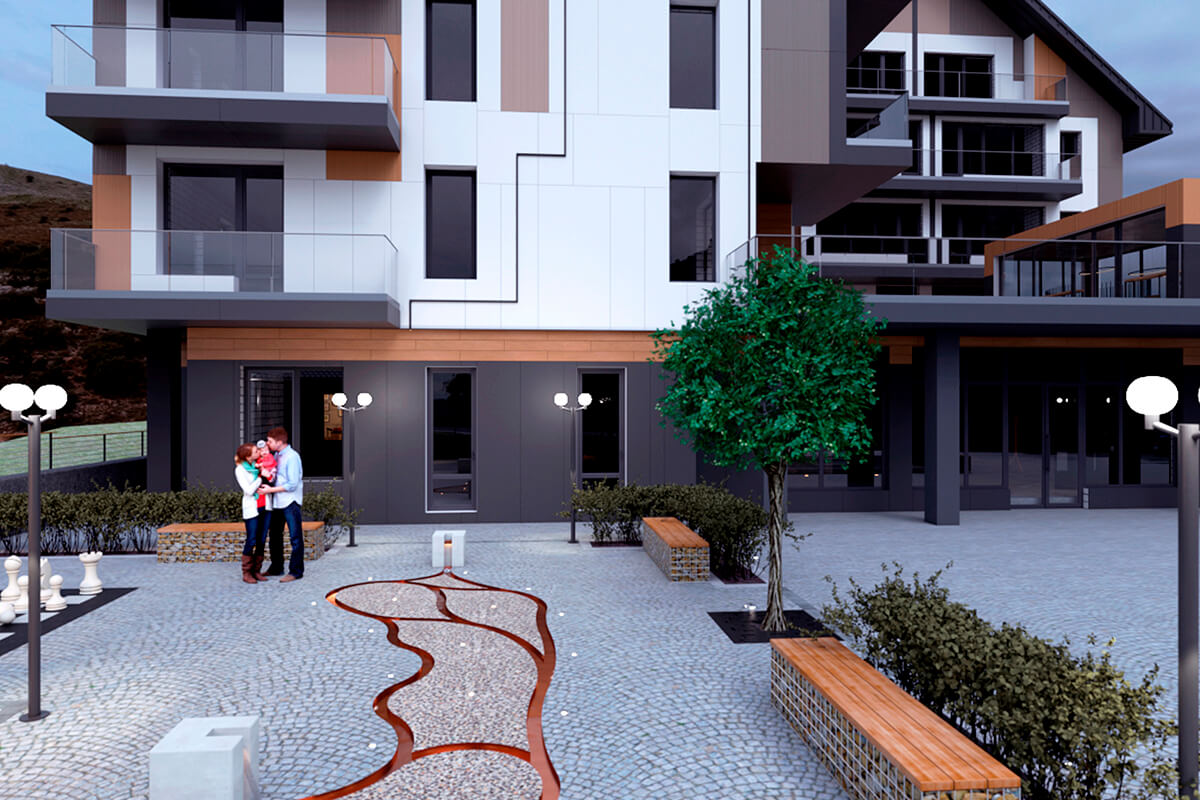